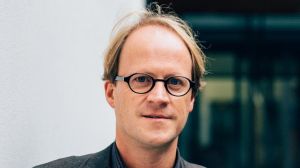 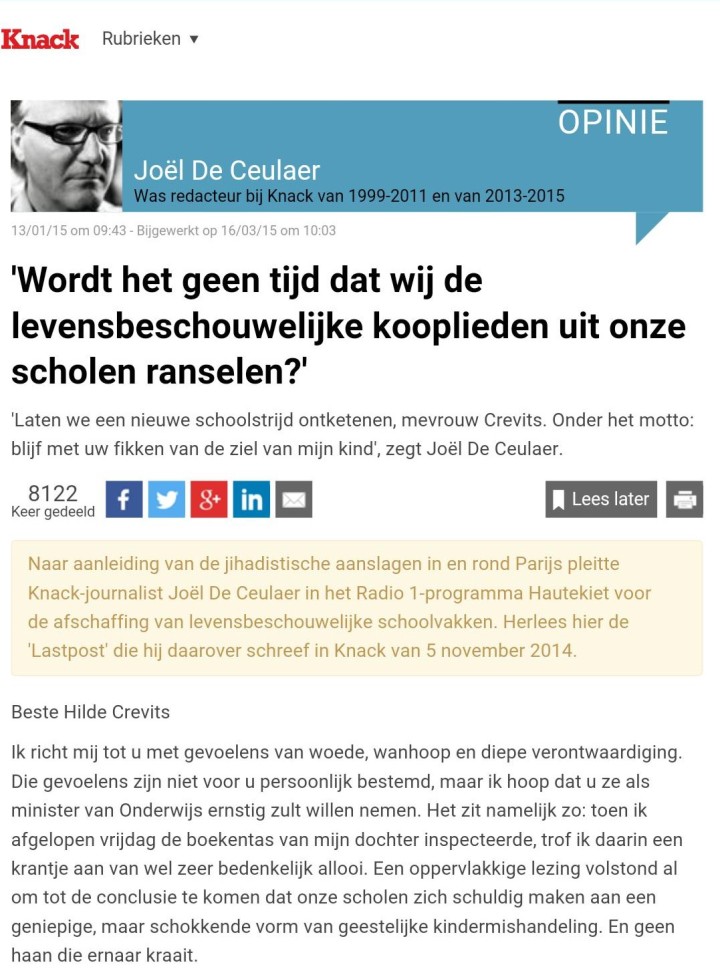 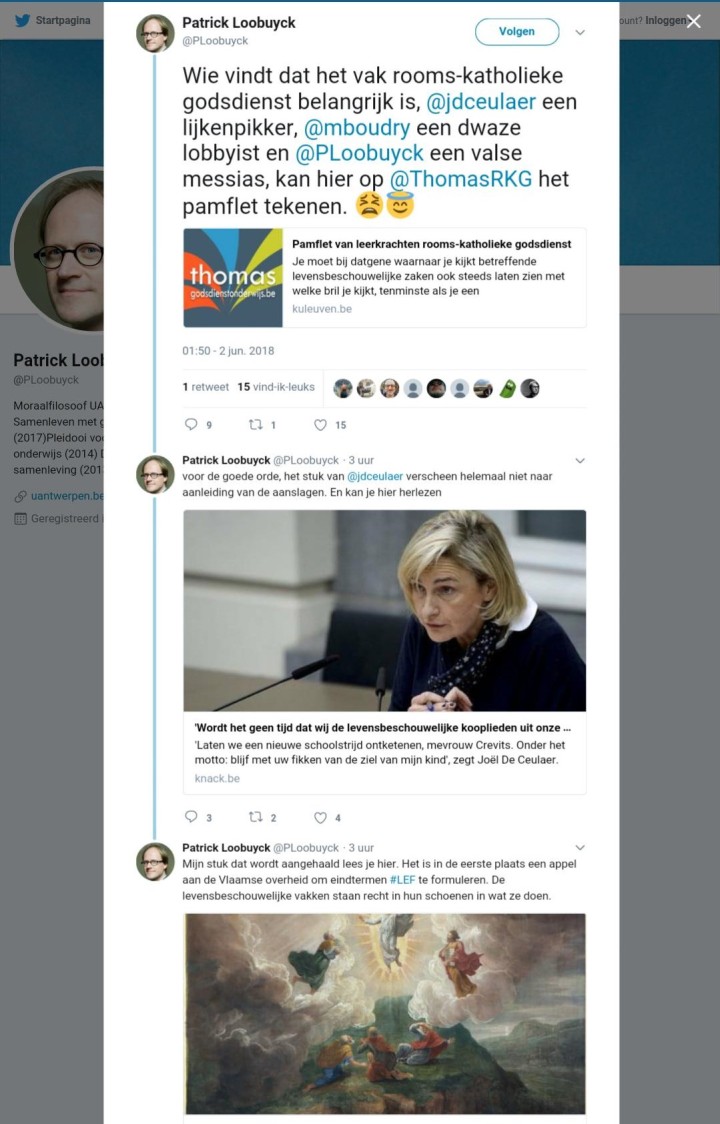 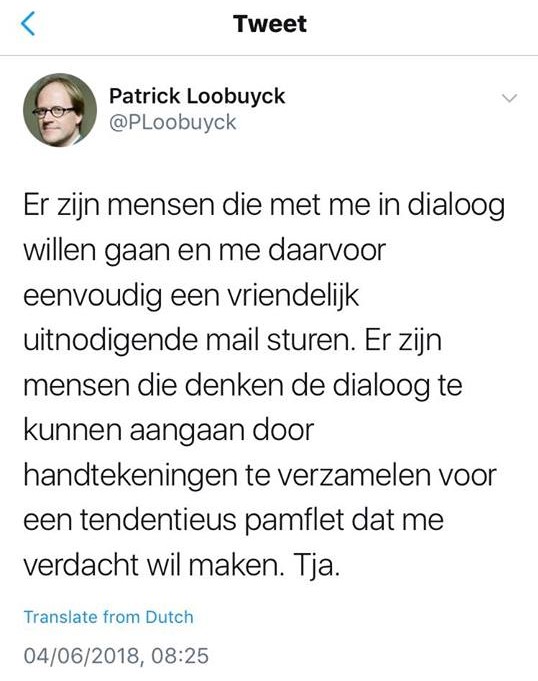 Some atheists nowadays are a bit confused as to what contemporary theology is all about, also in Belgium. Hence it is no surprise that Maarten Boudry, a quite public philosopher of science and a devoted opponent of all things religious, could tweet the following statement: 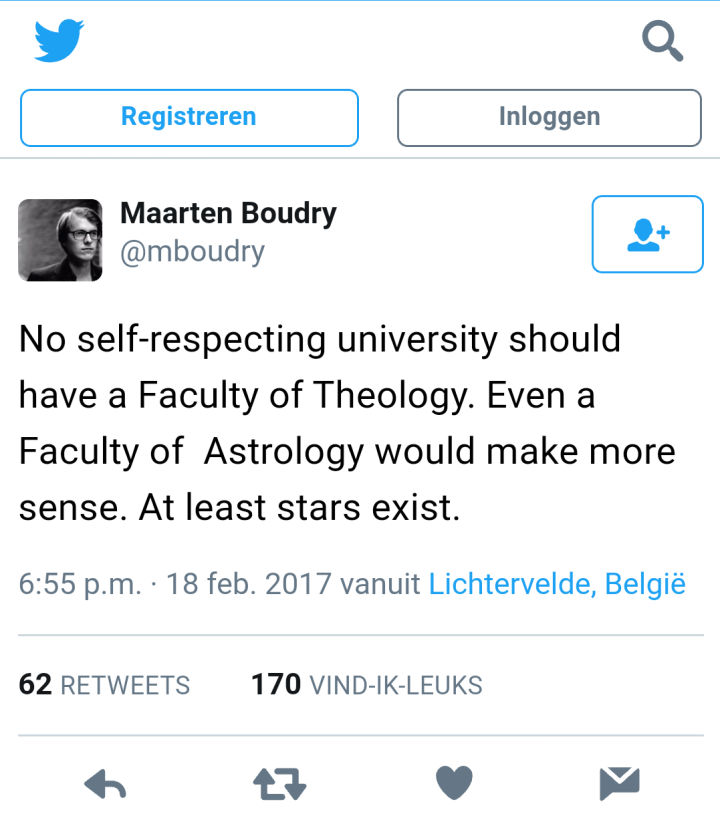 Well, what do you know, according to Maarten Boudry, Harvard is no self-respecting university and neither is Yale, because they both have faculties of theology! How could they?

In a piece for Belgian newspaper De Standaard Boudry tried to explain why he thinks that contemporary theology is not a scientific activity. One of his final sentences reveals a great deal about his ideas on theology and literary criticism:

The equivalent of a theologian in literary criticism is someone who asks himself where exactly 221B Baker Street is located, or someone who examines a map in search of Middle-Earth.

Okay, let’s see if this statement is true for theologians who received their education at universities like Harvard and Yale by briefly interpreting a story from the Bible. Why not take the well-known story of Cain and Abel in the book of Genesis (Chapter 4)? If you read the work of Harvard theologians, then you will notice that none of them ever claims this story is anything else but a myth. However, being a myth, it nevertheless expresses the universal experience that “human beings can be so jealous that they are capable of killing the human being they are jealous of”.

Anyway, both those theologians and (supposedly also) Maarten Boudry know that great literature can reveal universal truths through stories that never really happened. Even fiction about fiction can be true in that sense. Read for instance how the character of the Chinese butler Lee interprets the story of Cain and Abel in John Steinbeck’s magnificent novel East of Eden (click here).

It should be noted that metaphors and allegories may also refer to real historical events and experiences. The story of Jesus who is tempted by the devil in the desert, for instance, says that Jesus was historically experienced as someone who didn’t give in to the lust for power, among other things.

It’s common for writers to use images. There’s nothing “sophisticated” about this type of interpretation. Of course, we might have to study a bit to understand the idiom and images of an ancient culture. But hey, that’s what science and rationality are for. Who knows, in two thousand years’ time, people might have to explain that the Dutch expression “Hij heeft vele watertjes doorzwommen” (“He swam through many waters”, meaning “He’s been through a lot in his life”) can be true even if the person in question doesn’t know how to swim.

By the way, the claim that Jesus of Nazareth never existed is, from a scientific point of view (in the eyes of both atheist and non-atheist experts), as ridiculous as the claim that creationism is more plausible than the theory of evolution. For more on this, click here.

Now that the error about Harvard theologians and the like is corrected, we can perhaps deal with some other issues as well in order to get a clearer picture of what contemporary theology is all about. Let’s take another tweet from Maarten Boudry as a new starting point to again correct some errors: 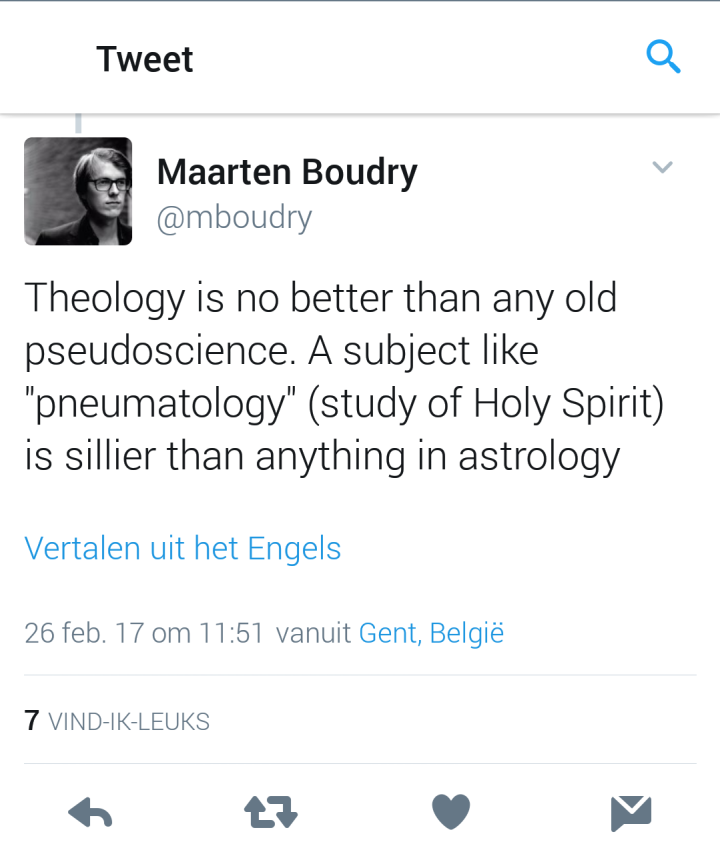 What are the views of Augustine of Hippo concerning the Holy Spirit?

This type of question can be dealt with by any researcher, regardless of the fact that the researcher is an atheist, a Hindu, a Muslim, a Christian or anyone else. The main things needed are access to the work of Augustine, critical and scientifically sustained research on the Bible, ancient philosophy and the Church Fathers, and a thorough knowledge of Latin and other classical languages.

Of course, as is the case with all subjects of the humanities, in order to conduct an objectifiable research, also the interpretive starting points must be taken into account. No interpretation of Augustine’s work is neutral, but once researchers have agreed on their interpretive framework, they will be able to conduct a research that comes to similar conclusions as the research done by other scholars who use the same framework.

Pneumatology is but one part of a Christian theology. More generally speaking, contemporary theology is concerned with the scientific study of concepts of God and their implications. Again, an example:

Where was God at Auschwitz?

The answer to this question of course depends on the concept of God one uses. If God is thought of as an almighty being in the sense that God has the power to control everything, and at the same time as a being that is all good, it becomes clear that such a God, in the face of the Holocaust, cannot exist. If, on the other hand, God is, among other things, thought of as a love that manifests itself regardless and independent of the possible risks (and thus ‘almighty’ in a totally different sense than ‘in total control’), then God is present during the Holocaust in the loving attempts of people to save their suppressed neighbor’s life.

Anyway, to conclude, here are some more examples of questions in contemporary Christian theology which prevent other errors concerning this field of study. Again, these questions can be dealt with in an objectifiable way by believers and non-believers alike:

What does the Catholic Church mean when she says that God is revealed through Christ?

Is Catholic priest and famous physicist Georges Lemaître (founder of the “Big Bang” hypothesis) in agreement with the age-old teachings of his Church on the Bible as one way of ‘divine revelation’ when he claims the following: “Once you realize that the Bible does not purport to be a textbook of science, the old controversy between religion and science vanishes. […] The writers of the Bible were illuminated more or less – some more than others – on the question of salvation. On other questions [scientific, historical, moral] they were as wise or ignorant as their generation.”

Why doesn’t the Catholic Church accept the fundamentalist reading of the Bible (click here for more)? What God concept and concept of revelation lie behind the rejection of fundamentalism?

What are the core differences between a fundamentalist reading of the Bible and medieval interpretations of the Bible? What concepts of God lie behind these differences?

Do Catholics have to agree with everything the pope says regarding moral issues? Is it acceptable for the Church that, for instance, 63 % of white American Catholics is in favor of the availability of same-sex marriage (this percentage from the same poll on the legalization of same-sex marriage shows that American Roman Catholics are more supportive of marriage equality than are the average American by a full ten percentage points – click here for more).

What kind of different texts are there in the Bible and how can we read them to do them justice?

What concept of God and of revelation is used by the Evangelical minister Pat Robertson and what are the implications regarding ethics, world-view and the view on what it means to be human?

What concept of God and of revelation is used by the Catholic Jesuit priest Karl Rahner and what are the implications regarding ethics, world-view and the view on what it means to be human?

[By the way, knowledge through revelation is a day-to-day experience which is not necessarily crazy or irrational: somehow you would expect that you know a person who reveals himself to you, every day, honestly and faithfully, better than a person you only know from scientific descriptions but have never met. Or would it be true that the “real” and “complete” identity of a person (his “soul”, to use an age-old word) can be reduced to what science may say about him?]

What are the main differences between Lutheranism and Catholicism?

There is no need to change the definition of theology. The discipline and faculty of theology and its researchers have the right to define themselves within the required criteria of the academic world, even at Harvard University. 😉

A REPLY TO MAARTEN BOUDRY’S REPLY

P.S. Maarten Boudry tweeted two times in reply to this post. In his second reply he called me a “sweaty theologian”. I’m not sure where that came from 🙂 , but anyway, I expected some ad hominem comment sooner or later from him.

Boudry’s first reply reminded me of a story about a certain Theo Longshot. Theo was quite a character, a philosopher with strange, challenging ideas. Many people knew his name, they knew he existed, but very few had actually met or seen him. Photographs of the mysterious man were non-existent.

Martin Swissair was a young, ambitious reporter who decided to write an article on Theo. Since he lacked the time to talk to Theo directly, Martin decided to interview people who claimed to know Theo. In other words, his research was based on hearsay. Martin started off his article with a description of Theo’s appearance. Theo was white, supposedly had half long, light brown straight hair, wore glasses over blue eyes, was about 6-foot-tall and was dressed in costumes. He often wore a hat. The informants told Martin that Theo was 50 years old. 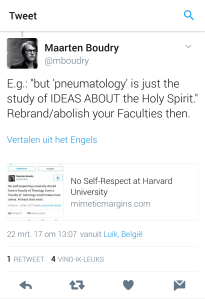 However, a couple of days after Martin had published his article on Theo Longshot, a young looking man appeared on his doorstep. He was black, had long and curly black hair, brown eyes, wore no glasses, was 5 ft 3″ tall and wore jeans and a T-shirt. He was 40 years old. He introduced himself as Theo Longshot, the man Martin had wanted to write an article about. Martin’s reply was very weird, to say the least: “If you’re not white, and if you don’t have blue eyes and don’t wear glasses, if you’re not 50 years old and if you don’t walk around dressed up in costumes, you shouldn’t call yourself Theo Longshot.”

Well, that’s basically Maarten Boudry’s reply as he is confronted with the fact that contemporary theology is not what he thought it was. Instead of admitting that he was fighting a straw man, he argues that the existing faculties of theology should accept his definition and idea of theology and shouldn’t call themselves theology at all. In this case, he behaves as if he is some totalitarian ruler of the academic world. However, just like Theo Longshot from the above mentioned story has the right to be who he is, contemporary theology has the right to be what it is, regardless of whatever straw man fallacy. One would expect that philosophers are able to question and criticize their own assumptions. Apparently, that’s a wrong assumption in this case.

READ MORE ABOUT BOUDRY’S FAULTY ANALOGY BETWEEN THEOLOGY AND ASTROLOGY HERE (IN DUTCH, ARTICLE BY WIM VANRIE FOR MIRARIPROJECT.COM).