Modern democracy makes it possible for each individual citizen to hold, express and exercise ‘own’ opinions and ethical principles, ‘own’ religious views and ‘own’ cultural preferences as long as they do not go against the democratically established laws of a particular state. A society of such individuals should, by its very nature, become ‘multicultural’ and ‘multi-religious’. And yet, what often happens is that many people insist on having their very ‘own’ opinion while the specific content of that opinion is the same as nearly everyone else’s. So the paradox is that a mono-culture arises of citizens who all understand themselves in the same way: as being autonomous individuals who make their own choices and pursue their own projects. This is the cultural mantra of the West. The very idea of having ‘own ideas’ is more important than really having them. 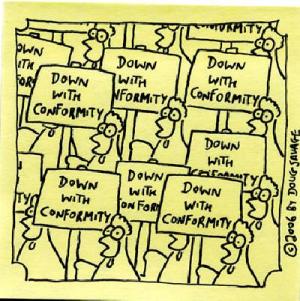 In reality, ‘diversity’ is often not defined in terms of specific values or belief systems (be it theist or atheist convictions and opinions), but in terms of economic value. Hence ‘culture’ becomes a matter of ‘taste’ and ‘lifestyle’ more than anything else. The more people believe that they have their own individuality to construct or to express, the more manufacturers and producers can launch something ‘original’ to satisfy the self-concept of potential consumers. 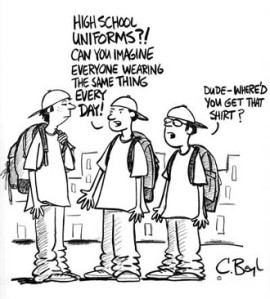 It should be noted that producers want to make money. They want to launch ‘the next trend’ rather than satisfy the supposedly very specific demands of one very unique individual. In other words, the illusion that we are autonomous individuals (mensonge romantique in the words of René Girard) who constantly have to make own choices keeps us at the marketplace where we are offered competing choices by different producers. [Moreover, we wouldn’t experience the desire to be original if we were.] Commercials make use of powerful models to guide these choices and that’s how, eventually and again paradoxically, new types of conformity are established (as people imitate those powerful models and each other – for more on this, read La Mode(rnity), a previous post).

It is remarkable how some people, who are convinced that they have very own individual opinions and views, all of a sudden make reference to something like “our culture, our values, our convictions and our habits” when they are confronted with “strangers”. Some voices in Europe consider the refugees as a threat to their particular state, both economically and culturally. Moreover, it is often the so-called ‘cultural difference’ that is presented as one of the main obstacles to social and economic integration of refugees.

Once again, as so many times in the history of mankind, it is the perception of a common threat or enemy that structures a common identity – past internal differences that, in light of that common threat, eventually don’t seem very fundamental. See, for instance, how the German Emperor Wilhelm II (1859-1941) begins his speech at the outbreak of the first world war (Source: Kriegs-Rundschau I, p. 43 – Original German text reprinted in Wolfdieter Bihl, ed. Deutsche Quellen zur Geschichte des Ersten Weltkrieges [German Sources on the History of the First World War]. Darmstadt, 1991, p. 49; Translation: Jeffrey Verhey) – Berlin, August 1, 1914:

“I thank all of you for the love and loyalty that you have shown me these past days. These were serious days, like seldom before. Should it now come to a battle, then there will be no more political parties. I, too, was attacked by the one or the other party. That was in peace. I forgive you now from the depths of my heart. I no longer recognize any parties or any confessions; today we are all German brothers and only German brothers. If our neighbors want it no other way, if our neighbors do not grant us peace, then I hope to God that our good German sword will see us through to victory in these difficult battles.”

Let us hope that we Europeans, faced with the refugees coming to Europe, do acknowledge our internal cultural diversity so that we might discover in a new light our shared humanity as living out the possibility that the other may be truly ‘other’.