I live in Belgium.

Belgium is a small country in continental Europe, internationally known for its beer, chocolate, waffles, currently world class soccer team, Brussels (the capital and “the capital of Europe”) and, well… French fries.

A lot of Belgians also pride themselves on having one of the most liberal legislations concerning moral issues like abortion, euthanasia, and LGBTI-rights (Belgium was the second country in the world to allow for gay marriage, for instance).

Some legislations definitely emancipated people from oppression by what was often perceived as “Catholic morality”. For years certain clerics indeed claimed the moral high ground in Belgium. Nowadays, especially since the child abuse scandal broke out in the Catholic Church, the tables have turned. So-called liberals have the strongest voice in traditional media like newspapers, magazines, radio and television, and they define what is morally preferable.

In short, secular liberals took the place of Catholic clerics on moral issues. The problem with this is that morality often is not constructed in a positive way, but that it is, in practice, merely defined by a “being against” everything religious. Of course Islam is also targeted. Rather strangely perhaps, secularists on the left and the right sometimes become divided over the treatment and rights of Muslims, for instance over the right for women to wear a headscarf in public. Some (mostly socialists, on the left) claim to protect the rights of a threatened and suppressed minority as they are in favor of the right for Muslim women to wear the scarf. Others (mostly nationalists, on the right), by questioning the right to wear a headscarf, also claim to protect potential victims, namely women who might be discriminated against by certain cultural obligations and habits. So there is a rivalry going on here on the question of victimhood.

The most extreme secularists, both on the left and the right, forget the ideological differences between them when they find themselves united against “the evil of religion”. They pursue their ideological battle against religion with religious fervor, actually imitating their religious counterparts (who are mostly fundamentalist extremists). Unwittingly and unwillingly (and therefore tragically), both parties resemble each other more and more. Extreme secularists do not dismiss a religious rationality regarding moral issues on rational grounds, but simply because it is labeled as “religious”. Likewise, fundamentalist extremists refuse to listen to “secular voices” simply because of the term “secular”, not considering the possibility that “a rationality of what’s good” (ethics) could reveal itself independently of one’s own (religious) cultural tradition.

Fundamentally, the mimetic (imitative) rivalry between extreme secularists and fundamentalist extremists is about the question how to define human nature. Paradoxically connected to this question is the question of human freedom. In both instances, “freedom” of individual human beings is understood as the result of having received the opportunity to realize one’s so-called “true nature”. Freedom, understood in these terms, thus indeed is paradoxical, since it is about obtaining the ability (the “freedom”) to fulfill the deepest desires (and urges?) one was born with (and did not freely choose). Apart from pedophiles and serial killers, the so-called individual true “nature” of human beings often seems allowed to have its way in our society…

Readers should please note that the idea of a so-called true identity one was born with, “from the beginning”, does not represent my own views on identity formation.

An example of the conviction that we have some hidden, “true nature” (from birth?):

Both the extreme secularists and the fundamentalist extremists consider the other party as representing a decadent perversion or suppression of our “true” nature. Hence the different attitude regarding homosexuality by, for instance, certain Muslim fundamentalists who try to prohibit it and secular liberals who defend gay rights. Both groups claim to protect human nature and human freedom (those Muslims might argue that prohibiting homosexuality is like prohibiting alcohol – a drug that could turn people into addicts).

And so you get weird situations like the following (especially if you’re an alien visiting earth, more particularly a country like Belgium), to name but two…

The Belgian Advisory Committee on Bioethics regards ritual circumcision of boys on religious grounds as a custom that should be abandoned. It leaves open the possibility for this type of circumcision for grown-ups. The financial burden of such a circumcision should, according to the Committee, also not be carried by society. 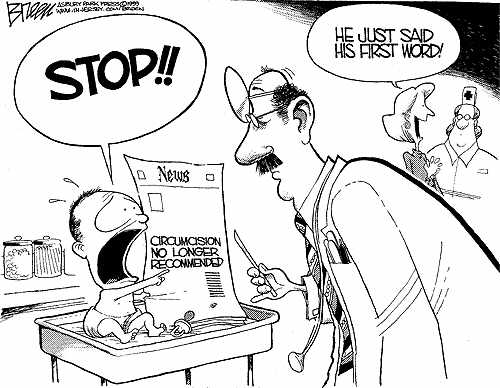 In short, surgery as the result of the craving to establish a certain identity is considered “mutilating” by official standards in Belgium in the case of male circumcision. Even when adult (Jewish or Muslim) men would decide to have themselves circumcised, it is believed that the financial burden for this operation should not be carried by society. Moreover, an identity issue on religious grounds is often perceived as the result of a kind of “psychological illness” (people having been “brainwashed” and what not).

On the other hand, surgery as the result of the craving to establish a certain identity is considered “liberating” by official standards in Belgium in the case of sex reassignment surgery. It is believed that parts of the financial burden for this operation should be carried by society, and already minors can start a therapy with puberty blockers. Moreover, all kinds of action groups try to “stop trans pathologization”, and the influence of these groups is already visible in documents like the Ferrara Report on the Situation of Fundamental Rights in the European Union.

Again a little note to readers as to where I stand personally: I do not think that the financial burden for surgery as a result of mere “identity formation” (on religious grounds or otherwise) should be carried by society. I am also not in favor of non-medical circumcision of young boys, as I would question hormone therapy for non-medical reasons on a young age. The debate is open. If adults ask for tattoos, piercings, circumcision and the like, then they are themselves responsible to pay for it. Sex reassignment surgery as a consequence of a medical condition like “gender dysphoria” is something else, of course, although it is only one way of dealing with this condition. Other ways of dealing with it should also be considered. Belgium has an elaborate health care system that supports the treatment of any kind of medical condition. To the extent that a trans person does not suffer from a medical condition (I indeed agree to “stop trans pathologization”), it should be examined whether or not the health care system should intervene (and, to be consistent, it should not intervene).

We should at least acknowledge some inconsistencies in our assesment of the children depicted below (a Jewish Kid and a Trans Kid):

Nuns and monks of enclosed religious orders are often mocked for living a so-called alienated mad life (sober and in community), and are also accused of “not contributing anything useful to human society”.

Hipsters, who try to live ecologically responsible, often by embracing vegetarianism and by experimenting with new types of community housing, are hailed as “the dynamic, enlightened young future of human society”.

However, the ecological footprint of the average hipster is presumably bigger than that of the enclosed nun or monk, as the hipster often feels the need to “travel the world” in order to “find him- or herself”. And yet the lifestyle of those nuns and monks is never praised as “an example to the world”…

Maybe it is time to ask ourselves the question what our ethics and legislations regarding certain moral issues are actually based upon, as well as our assessment of “religious life” in general. It should be something more than the “being against” as the result of the ever changing game of mimetic rivalry, no? Yes, often the protection of vulnerable life is a valid motivation, but are we sufficiently consistent in what does or does not protect that life?

Anyway, we do not escape the mimetic aspects of our nature, so we best learn to recognize and understand them…